When contemplating a new roof, many people hope to simply do a shingle over and avoid the extra cost and mess of tearing off the existing roof and starting from scratch. Although it sounds like a good idea, we can assure you the cons heavily outweigh the pros. In fact, the ONLY pro to a shingle over is it’s cheaper and cleaner. The problem is, what if there is an unknown leak or bad roof flashing? Will it be fixed? Will the damaged wood be replaced during a shingle over? Unfortunately, the answer is no.

Just the other week, we came across a leak around a dormer the homeowner never knew about. Obviously, during the tear-off, we spotted the leak and were able to change out the rotted wood and re-flash the area. In a shingle over, if some of the decking has buckled and warped over the years, it likely isn’t going to be noticed and fixed. This can lead to increased rot, mold, and decrease the structural integrity of your home.

Long-Term Effects of Shingling Over Shingles

Apart from the problems going unnoticed during the actual shingle over, there are long term effects to consider as well. For instance, instead of just one roof on your home, you now basically have two. That’s a lot of extra weight, putting added stress on the roof decking. Also, two layers of shingles are going to attract a lot more heat than just one layer, which can lead to the shingles prematurely deteriorating. Also, what about all the algae growth and bacteria on the original layer of shingles? Now everything is trapped under the 2nd layer of shingles, again having the potential to shorten the lifespan of the top layer of shingles.

Roofing Over Your Existing Roof Is Not Worth It

If you haven’t noticed yet, we are not fans of shingle overs – not at all. We don’t recommend them nor do we do them. Over the years, we’ve seen problems caused by shingle overs. Does it cost more to tear off? Yes. However, by spending a little more now, you can save yourself thousands in the long run.

Most home bathrooms are equipped with a ventilation fan that can be used during showers to expel hot moist air from building up in the bathroom. Have you ever wondered where all that moist air goes? If not, then you’re not alone. Alot of times we find that bathroom exhaust fans simply dump that air into the attic. Now, you’ve got an attic full of moisture and a prime environment for mold growth. Mold growth on plywood and OSB will actually delaminate and weaken the strength and integrity of the wood.

Below, is a picture of what years of unproperly vented bathroom fans can do to the underside of a roof decking. In a case such as the one below, the best thing to do is remove the moldy roof decking and replace with new. (After correcting the source of the moisture first!) 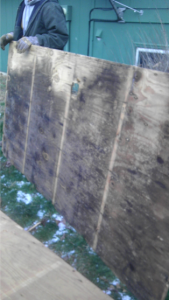 How to Vent Bathroom Exhaust Fans

Now that we’ve established our main source of moisture contributing to the mold in the attic, we need to correct the situation. It is a pretty simple process which involves cutting a small hole in the roof decking, extending the insulated exhaust tubing to the hole, and attaching it to an exhaust vent on the roof. (Pictures below) 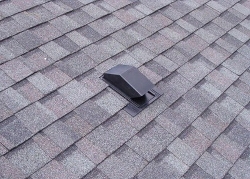 Proper ventilation of bathroom exhaust fans can save homeowners thousands of dollars in costly roof repairs and mold remediation. Not to mention, help keep your entire family safe. For more roof related information, feel free to browse our site or check out our Roofing 101 page!